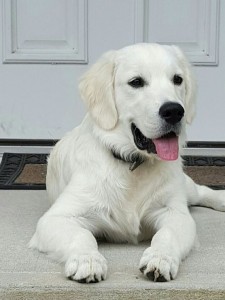 Is there anything cuter than a white golden retriever? No matter what shade of gold their gorgeous fur is, you can’t help but love these adorable pups, who are known for getting along well with young kids and other animals, taking well to training, and being overall the quintessential American family pet.

Have you ever wondered where this breed originated? Golden retrievers can trace their parentage back to one Lord Tweedmouth of Scotland in about 1890, says the American Kennel Club. Lord Tweedmouth desired a medium-sized dog that would be a loyal companion and hunter, and found exactly that and more in the golden retriever. Though there were already plenty of breeds that were apt hunters, Tweedmouth wanted a breed of his own that would offer something extra to his hunt. So, according to Pet 360, he crossed a wavy-coated retriever with a tweed water spaniel.

The four resulting puppies (which were adorable, we imagine!) were wonderful bird hunters, and were later crossed with bloodhounds, black retrievers, setters and tweed spaniels. The resulting dogs had similar attributes, but one had the flat white-yellow coat we are all familiar with today.

The dogs were brought to America, and in 1927, the American Kennel Club recognized the breed.

One thing you may not know is that golden retrievers aren’t only classified as one color “golden.” They’re actually broken down a step further info three different shades – light golden, golden and dark golden. The light golden, or “white,” golden retrievers that we specialize in here at Southern Charm Goldens, are perhaps one of the most well-known varieties. However, a common misconception is that the different colors are all different breeds. In truth, one golden retriever litter may have a mix of puppies in each shade, from light to golden to dark, depending on the parentage.

For more information on this wonderful breed, or to find out more about available puppies, email whitegoldens@yahoo.com or call us at 662-456-6054.

← Our Blog
Thanksgiving With Dogs: What’s Safe to Share? →